Fencing means different things to different people. For some it is just a fun hobby, a form of exercise, or a chance to take part in the social life of a club. Others take it very seriously, training several times a week and going to competitions on most weekends.

Ages range from under ten to over eighty; it is a lifelong sport for men and women, where an experienced seventy-year-old is almost certain to beat a beginner of twenty. It is one of the largest sports worldwide in terms of participation, and clubs can be found all over the world.

Fencing has evolved from centuries of duelling into an extremely safe sport. The weapons used are blunt-ended, and fencers wear protective clothing which is reinforced to prevent injuries. The rules of modern fencing were formalised in France and its governing body, the Fédération Internationale d’Escrime (FIE), is based in Switzerland. The FIE is responsible for standards and for the competition rules used at every level, from the U14 National Championships to the Olympic Games.

You can start fencing by joining a club, where you will be able to take lessons from a coach and spar with other members. The Clubs page lists all of the fencing clubs in the country, including their contact details and training times. Some clubs run introductory courses or separate training sessions aimed at beginners. 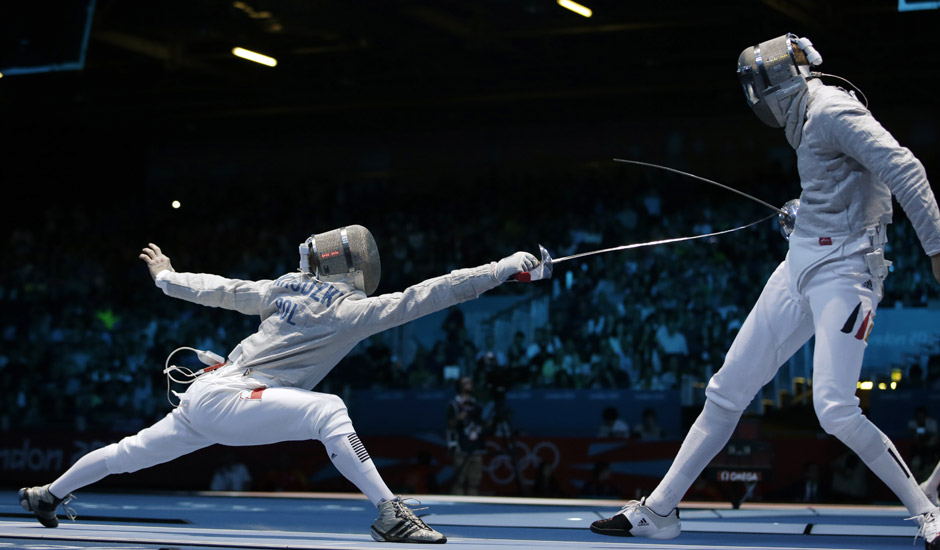 When you join a club, you may find yourself learning one weapon initially (frequently foil), and later deciding to switch to one of the others. In all three weapons, you will learn footwork, various attacks, defensive parries, and counterattacking ripostes. No matter which weapon you eventually choose, there is an endless amount to learn, and also lifelong opportunities to meet and compete with all kinds of people, strike up enduring friendships, and have a lot of fun.

For your first night, all you need are a t-shirt, tracksuit bottoms (or similar), and a pair of trainers. Clubs provide loan equipment for beginners, but most fencers eventually buy their own gear for training and competitions. A guide to the equipment used can be found below.

Weapons: The Different Types of Fencing

The sport of fencing consists of three distinct disciplines: foil, épée, and sabre. Épée and foil share roots in the duelling tradition, while sabre developed from swordfights on horseback. Each discipline has some of the flavour of its origins in its present-day rules and gameplay. Fencing tournaments may be organised at just one weapon or as large ‘6W’ (six-weapon) events with competitions in épée, foil, and sabre for both men and women.

Fencers often specialise in just one weapon. The weapons differ in the way they are used to score hits: in foil and épée, only a thrust with the point of the weapon counts, whereas in sabre a hit can also be made by the side of the blade.

A hit must arrive on the correct target area. The graphic below shows the valid target areas for each weapon (in orange). In foil, this is the trunk of the body; the limbs and head are ‘off target’. In épée, the target is the whole body including the head, while in sabre the target is everything from the waist up.

The timing of the hit which scores is also different between weapons. In épée, it is simply whichever hit arrives first, but in foil and sabre it is the hit made by the action that started first. In these two weapons the Referee determines which action had ‘right of way’, i.e. which attack began first.

The first items you should consider purchasing are a mask, jacket, glove and plastron. Sports shops in Ireland do not carry fencing equipment but you can purchase online through one of the major fencing suppliers (we have a supplier list in our Links section).

Clubs and coaches often have arrangements in place with various distributors or manufacturers, so you should check with them before committing yourself to any major purchases.

All jackets and breeches should meet a minimum safety standard of 350N, which means the garment is capable of resisting 350 newtons of force without tearing. For international competitions, the minimum standard is 800N.

At all levels, plastrons should be 800N and masks should be 1600N. As of September 2014,  gloves used for sabre must provide 800N protection. There is no current minimum standard for gloves in foil or épée.

A Brief History of Fencing 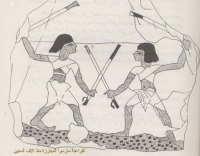 The sport of fencing can be traced back as far as Ancient Egyptian times, when hieroglyphic artwork recorded a sport in which two combatants fought using sticks and padding much like modern day fencers. Despite once having been used by civilisations as diverse as the Greeks, Romans, Babylonians and Persians, the sword became increasingly obsolete with the evolution of military technology such as armour – though it did not disappear entirely from warfare until the 20th century.

Despite the advent of gunpowder, officers and gentlemen continued to carry swords – even off the battlefield. These soon found a role as duels came into fashion to settle personal disputes, especially over ‘matters of honour’. Duels were usually fought to first blood, or until one duellist forfeit; intentional fights to the death were rare. Swordsmanship became an essential part of a gentleman’s education, with fencing schools appearing across Europe to develop safe, efficient techniques for attack and defence. One of Descartes’ first works (now sadly lost) was a treatise on fencing based on his own geometric co-ordinate system.

Schools in France began assessing fencing skill through ‘blank duels’ with blunt weapons, in which marks were awarded for style and technique as well as actually hitting one’s opponent. It is from this French tradition that the rules of modern fencing developed. Foil, épée and sabre emerged as separate disciplines with their own individual rules, which are discussed below. 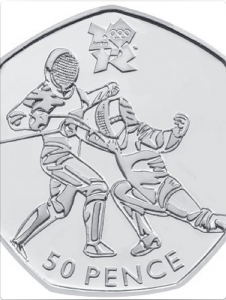 Fencing has been included in the modern Olympic Games since their inception in 1896. Along with swimming, gymnastics, and athletics, it is one of only four sports to have been contested at every Summer Olympiad.

The 1912 Olympics introduced the Modern Pentathlon, which features a one-hit variant of épée fencing intended to simulate a duel to first blood.

Since then, the sport of fencing has continued to develop, with continual improvements in safety standards, athlete training, and fencing technology. The most notable change over the last century has been the development of electronic scoring, which has allowed for a dramatic increase in the pace of the action, while weapons and protective gear have become lighter and safer.

Modern day fencing has been constantly refined and perfected, with every generation of fencers striving to improve on their forebears.

The rapier was developed in Italy during the 16th century, and is still used in the sport today, though now known by a different name – the épée (simply the French word for sword). Its evolution to the modern-day weapon aroses from the adaptations that were required to improve its offensive and defensive capabilities. Originally it was a very light, long blade, which could inflict damage using both the point and edge. It required athleticism and expert technique to be wielded effectively. Of the three weapons used today, the modern épée – in spite of many improvements – remains the closest to its roots.

Because simultaneous hits are allowed in épée, the action can often be slower and more measured than for foil or sabre, and it is consequently easier for a new spectator to follow the progress of a match.

As the new weapon caught on, duelling became a popular (if illegal) pastime among the gentry, particularly when honour needed to be defended. The Ireland Information Guide has a comprehensive history of duelling, and you can read an account of duelling in Ireland on the Chapters on Dublin History website – and even learn about duelling clubs and rules. The threat of arrest and imprisonment, along with the very real danger to life and limb, meant that it was necessary to practise and become as efficient and skilled as possible. This gave rise to the development of the foil.

The foil was a training weapon for duellists. Training was carried out wearing protective padding and using a walnut on the tip of the blade to prevent injury. In this weapon, the emphasis was put on attacking the vital organ areas, specifically the torso. It gradually developed its own unique rules and style. As duelling became less commonplace, foil took over as a major competitive sport with a distinct difference from épée fencing: “right of way”.

This was a rule whereby the referee decided who had the right to attack in any particular “phrase” of combat by observing the actions of the combatants. Basically, the person who makes a clear attack by moving forward with a straight arm (Fencer A) is considered to “have the attack” until the opponent (Fencer B) makes a parry and riposte – at which point, possession of the attack moves to Fencer B.

A fencing “phrase” is the series of actions between the first attack through the resulting parries and ripostes, leading to the moment when a hit is made and the president (or referee) is required to make a decision as to whether the hit is valid or not. Foil fencing action is fast, punctuated by halts as the president makes the decision to award a point.

The sabre came to the sport from the 18th century Hungarian cavalry, and the modern weapon is descended from the Turkish scimitar. It is a simulation of horseback battle, as the target area for the weapon is above the waist. This allowed combatants to “spare the horse and not the man” at a time when good cavalry horses were difficult to come by, especially on the battlefield.

Sabre style is also subject to the “right of way” rule. The play is fast and furious, and like foil, is punctuated by halts from the president.

Ten years after fencing featured at the first modern Olympic Games, the sport formally came to Ireland in 1906 when the Irish Fencing Club was founded in Dublin. It was not the first club in Ireland, but it was the first in which the principal aim was exercise and sport rather than duelling. The club closed in 1917, but was restarted again in 1933 following advertisements in Dublin newspapers.

All of the Irish clubs currently training are listed on the Clubs page.

Ireland has a long tradition of sending fencers to the Olympic Games, most recently Siobhan Byrne in the Women’s Sabre event in 2008. Well-known Irish fencers include Peter O’Toole and William Butler Yeats (taught by Ezra Pound while Pound was employed as his secretary). 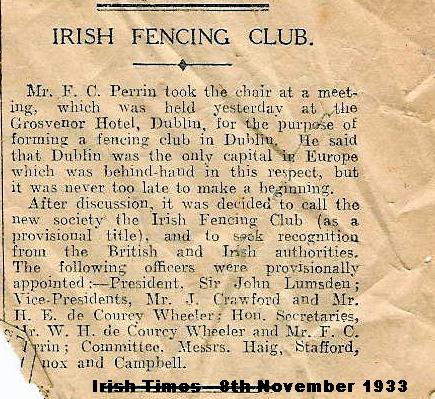 Mr. F. C. Perrin (sic) took the chair at a meeting, which was held yesterday, at the Grosvenor Hotel, Dublin, for the purpose of forming a fencing club in Dublin. He said that Dublin was the only capital in Europe which was behind-hand in this respect, but it was never too late to make a beginning.

(with thanks to the Foxe family of Clondalkin. The ‘Mr. F.C. Perrin’ referred to is Mr. F.C. (Guy) Perrem who had taken up fencing while at school in France.)