Teaching fencing from an early age offers many benefits to both the student and the school. Increasing sporting diversity within Irish schools will improve sports participation and help promote a lifelong involvement in sport and physical activity by our school children. The Interschool fencing programme fosters collaboration and competition between schools and key event in the calendar is the annual Interschool Cup competition.

The competition is open to schools who provide fencing classes to their students during school hours and entry is through the fencing coach. The format of the competition is team based, with an emphasis on learning and building friendships that will support fencers as they compete on the national and hopefully international circuits in the future.

This years competition was kindly hosted by Clongowes Wood College.

14 teams of first years and second years from four schools competed over 3 rounds. The Royal Belfast Academical Institution (RBAI) won both the first year and second year trophies with Glenstal Abbey School awarded the Maitre Patrick Duffy Memorial Trophy for their esprit de corps and sporting conduct to other teams.

The Transition Year (TY) in Irish Schools is designed as a year of personal growth and development rather than academic achievement. This year TY students travelled from all over Ireland to compete in their very first fencing competition. The teams represented schools where fencing is taught to all students as part of their sporting curriculum and competitors had all received a short series of lessons from their fencing instructor.

This years competition was kindly hosted by St Vincents Castleknock College on Saturday, May 4th.

Six teams entered from 5 schools and the results are:

For individuals to travel so far and represent their schools using skills that have only recently been acquired represents a real spirit of adventure and is a credit to all competitors. 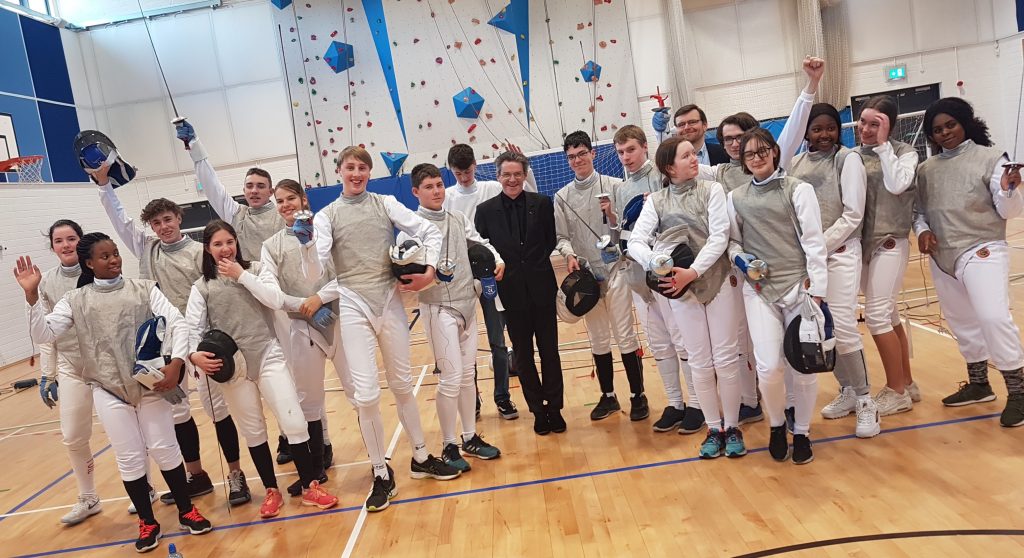 The inaugural Interschool Cup was hosted by Clongowes Wood College on Saturday 19th of May, 2018 and was contested by eight teams from four schools:

Thank you to Clongowes for hosting the event and to Adrian Lee for sponsoring the trophies and medals. Most of all though, thank you to the schools who are teaching fencing to their school children and good luck to all the participants!

Clongowes Wood College and Glenstal Abbey School took an early lead with both A and B teams defeating their opponents Dunamase and RBAI in round one.

The RBAI A and Clongowes B match was closely contested with the lead switching 6 times before Jaime Palacios from Clongowes closed off the match 45-42 after starting 2 points behind his opponent.

In another close round one match Glenstal B defeated Dunamase A 45-38 after the lead switched 4 times. Luke Fahy fought hard, winning 31 of the 45 hits.

RBAI B trailed for much of their match against Glenstal A, until captain Ryan Dumigan wrestled back the advantage in a 6-2 bout to leave the Belfast team leading 40-38 before the last 2 fencers came to the piste. A strong finish by the Glenstal anchor Ben Costello gave Glenstal A the final score of 45-41.

Clongowes A took victory in the last round one match beating Dunamase B team 45-23. The home side led from the start, resisting a 7 point effort from Dunamase fencer Dagmara Krol mid way through.

In round two Clongowes A beat Glenstal A 45-28 and claimed a place in the final. An early lead was created by Glenstal’s Ben Costello before Clongowes captain Kosi Ugwreru wrestled back control after which his side maintained a comfortable lead.

They were joined in the final shortly afterwards by Clongowes B who defeated Glenstal B. The Clongowes team lead from the start despite a mid match rally by Glenstal’s Luke Fitzgerald.  Jaime Palacios from Clongowes secured his teams place in the final when he completed the match with a final score of 45-27.

Also in round two the RBAI teams both defeated Dunamase College with team A winning 45-31 vs Dunamase A and RBAI team B beating Dunamase B 45-24. Man of the match for the RBAI was David Martin as he fenced amazingly well, catching up from behind several times during the day for team B.

The grand final pitched Clongowes A and B teams against each other while Glenstal A and B fought for bronze. Both matches followed form with the A teams victorious 45-25 for gold and 45-34 for bronze.

Runners up Dunamase College were awarded the Maitre Patrick Duffy Memorial Trophy by Fencing Ireland Chairperson Philip Lee who singled out Dunamase for their technical ability and ‘fencing intelligence’.

The final team placings were:

The trophies are awarded to the schools based on the final placings of all the teams using the points system applied by Fencing Ireland for the national rankings. The final school results are:

Competitors in the 2018 Interschool Cup